Of Bagpipes and Lampshades

The bagpipe is a curious institution - always plural. I was reminded of this when, at about 2.30am on New Year's morning, I was deafened by the racket coming from downstairs, when Malcolm was playing this absurd instrument. He claims he is unable to play any musical instrument, and proved this conclusively in those wee small hours. They are the property of an Irish couple who moved in across the village green about six months ago, and we now have a new friend, whose name is Rommel, an appropriate name for a Wymerr...er...Whymarr....er Weimarran...er... Big Grey Dog.

But that was a while ago, now. My tardiness in keeping up my Diary is all due to the fact that I haven't been particularly well recently. My boss had been telling me off for chewing myself, and was trying to feel where I was chewing, when she came across a little lump on the back of my hip. Well, before you can say "aaah diddums, Chudleigh, you need a biscuit", I was bundled (somewhat unceremoniously for a superior canine with the status that I have had bestowed on me) into the back of the car and driven post haste to see my mate Chris, our vet.

I always think "our vet" is a very grand term. After all, I have absolutely no choice in the matter. Me, Molly, the cats - we all go to see "our vet" once a year whether we want to or not, to have thermometers inserted in unmentionable places, be pushed, prodded, and jabbed, all in the name of keeping us healthy. At the end of each annual inspection, we hear "he really is in good condition - if a little overweight", but what else is to be expected from one who dines of the finest scraps the customers in the Noah's Ark have to offer? Anyway, do I see these humans, the ones who are meant to know it all, suffer the same poking about by a man in a green coat? Not a chance.

Well on this occasion, I had to have an operation, and everything is now clearing up very nicely, thank you. EXCEPT... I am at present required to spend every minute of every day with a lampshade round my neck. I think they took it off the lamp standard in the drawing room - it is absolutely enormous. I thought they might have taken the hint when I went crashing round the house, banging into everything within a three foot radius of wherever I went. It makes a heck of a racket. However, I am still obliged to wear it, so that ploy hasn't worked, and it is still round my neck. I've now switched to plan B - I creep up behind them when they are walking round the house, and when they stop, I crash into them. Apparently, if I catch them just on the back of the calf, it really hurts.

Even being allowed to lie on the sofa all day doesn't make up for the inconvenience.

Molly isn't helping either. At first she was quite sympathetic, letting me sleep on my boss's bed where she usually sleeps. Now she has taken to teasing me - when we go with Malcolm for our morning constitutional round the football pitch, she chases after the ball and lets me get there first. At first I thought my superior athleticism was to the fore. Then, when I kept winning, I thought she was being kind. Finally I caught her watching with a supercilious expression as I tried to pick up the ball, which, even for someone of my admittedly superior intellect, is no mean achievement when your head's in a lampshade.

Now my views on the merits of tabloid journalism have never been particularly high. As someone who is the subject of a rather superior (dare one say, up market) collection of greetings cards, I have always considered myself more of a "Times" person than one of those smaller papers. Indeed, my boss (you know, the one who spends all day in front of a computer screen designing these cards) professes to be a keen aficionado of the Daily Telegraph crossword, and has a special set of colouring pens to fill in all those blank white squares. Molly doesn't care which newspaper she has, as long as she's allowed to carry it around all day.

But my day perked up recently, when we had a visit from a man who writes for "Sussex Life" (and is also owned by a couple of those Big Grey Dogs), although he added that he also scribbles away for the Daily Mirror.

He made an appointment to come for an interview, and arranged for a photographer to come and join in. For some inexplicable reason, he spent the first hour conducting an interview in the study with my boss, while Yours Truly was consigned, still sporting the lampshade, to be locked out in the garden and allowed in for the occasional sympathetic pat on the head. What a nerve! I'm the star of this particular show, but I hardly got a look in. 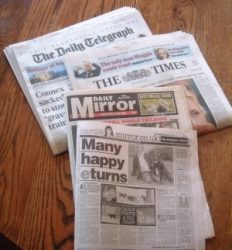 A little later, the man with the camera arrives, so we all troop out onto the Village Green to have our photograph taken. Next thing, "Me Me Me" Molly is in there trying to steal the show. I'm allowed to have the lampshade removed for what they call the photoshoot - as it's the first time I've been allowed this luxury for a week or so, you can understand that I am rather keen on the idea of having a good chew! Not a hope - the slightest indication of getting at that itchy bit just past my shoulder blades and my head is brought back to look at the camera.

So there I am posing for the camera and Malcolm is hovering behind the camera waving a biscuit in the air in the hope of catching my attention. By now we have a group of bewildered onlookers and all I want to do is scratch. So I bark a lot. Apart from summoning more onlookers from their cottages, that only achieves the need for more camera clicking.

After what seems an interminable time, the man with the camera has enough snaps to fill several albums, he disappears back to Brighton, the humans go to the pub for a very long lunch (ostensibly to conclude the interview), and I get sent home, now sporting the lampshade again. I ask you - it's more fun being locked in the larder!

This is the photo of me and my boss they published ... I don't look TOO overweight, do I? 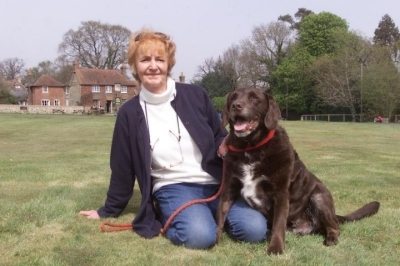 STOP PRESS: Hooray! Been given the All-Clear - no more lampshades for me!