It all started on Christmas Day, when all the humans were having their Christmas dinner. Now this really is a most peculiar institution in England, as it starts sometime around September, usually during one of the last cricket matches of the summer, when someone says (a propos nothing at all) "oh dear, it won’t be long until Christmas now", which is one of those ridiculous things humans say when there is a lull in the conversation or they can’t think of anything more sensible. I wouldn’t mind, but we had a blisteringly hot autumn, yet these humans are daft enough to turn a blind eye to the wonderful autumn colours and concentrate instead on something which will happen during the dark days of winter.

Actually, I had quite a good autumn. Me and my pal Molly managed to get out and around the village and create the odd bit of mischief, often meeting our friend Rosie who had managed to lose her owner Marion somewhere in the woods. They now have an understanding that they will meet under the chestnut tree at the top of the green, which is a remarkably sensible arrangement – Rosie really has trained her owner very well.

Our favourite haunt is behind the pub, where there are rich pickings from the food which has been thrown away. Molly, being a Labrador, demolishes anything on sight, but, being of a more superior, mixed, lineage, I have a more discerning palate, and only dine out on certain of the delicacies which humans have put to one side to the chorus of "that really was delightful". I ask you – if it was so delightful, why do they leave so much on their plates?! You don’t find too much left over in my dish, thirty seconds after it is put in front of me.

So, me and my pal Molly have been listening to endless outpourings about who is coming for Christmas dinner, what shall we have, which wine to get. Did I get a look-in here – I mean, there wasn’t a great deal in the "What-shall-we-get-Chudleigh-for-his-Christmas-Dinner" department, or "What is Father Christmas going to get liddle ol' Chudders?" No, all I see is the rear view of my boss, you know, the one who creates all these e-cards, crouched over the keyboard, drawing on the computer, and intermittently nattering on the phone to the so-called great and good making a whole series of plans for Christmas, and I don’t even get a mention.

Then there is the Ceremony of the Tree. When we go for a walk, I see millions of trees around the place, some keep their leaves on, others let them fall off. I have often wondered about the sanity of trees – I mean, why get rid of your coat when the weather turns cold? You would think it should be the other way round - any self-respecting mutt, of which I am sure you will agree you are in the company of a particularly superior variety - we get rid of ours when it gets hot, and then we like to share what we no longer need with the humans on the carpets and furniture in the house.

Anyway, I digress. As I say, you cannot move in this village for trees. (And much appreciated they are by us canine chaps, of course…)

So what do the Pear Tree Cottage humans do? Every year, early in December, they crawl up into the loft – I think it must be a form of ritual. After about twenty minutes of crashing around, to the chorus of "who put that there?", they emerge, clutching this enormous box, which I think they must have had up there for about twenty years. Anyway, they manage to get it downstairs, and somehow, amid exclamations of "where does this bit go?" eventually, in a corner of the Drawing Room, there appears this 7 foot "tree". I have to say it is not a variety I recognise, as the needles are all shiny, it doesn’t smell of any of my friends, and none of the trees I see in the woods has a fairy stuck on the top, but whenever I start to take a closer interest, one or other of the humans shouts "CHUDLEIGH DON'T" and I am despatched from the room in bewilderment.

In the weeks which follow, a collection of boxes appears under this "tree". I tell Molly that, even though they are red, green, blue and all the colours under the rainbow, they are the leaves falling off the tree. Being a dizzy blonde, she believes me! She isn’t bright enough to realise that these are presents, and with a bit of luck there should be something under there for yours truly – I mean with all this planning, the humans can’t have ignored something for me ... can they ...?

Eventually, THE day arrives – well, actually, the minute hand creeps past midnight on Christmas Eve and the humans stumble in through the door. Accompanied by more humans. Clearly they have been to the pub – still, at least they are careful not to lock me in the pantry whenever they go out, now. Hmm ... they don’t appreciate that this is the one time of year I wouldn’t actually MIND being shut in there for an hour or two. 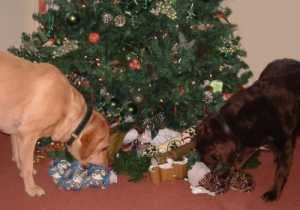 Christmas morning is remarkably quiet in the house – a bit of a surprise, but not wholly unexpected. Molly and I decide we want to go out, so chase each other round the house – we have found from long experience that humans really like us doing that early in the morning. Eventually Dumpy joins in, and we have a fine old time – when I say "joins in", Dumpy is my equivalent in the feline race, a rather superior Sussex Puma of a cat who sits on the kitchen table and yowls at us.

Finally the humans stagger downstairs, and it is soon time to open the presents. Early indications are looking good, with a rich variety of presents exchanged: expensive perfume, DVD’s, silk ties ... all terrific stuff. Me 'n' Mol are sitting there at our most attentive – heads to one side, ears pricked, tail wagging in anticipation – how can they refuse us?

Our moment of glory arrives – we each have a present. Oh what joy! What paroxysm of delight! 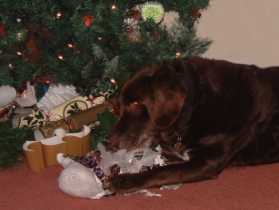 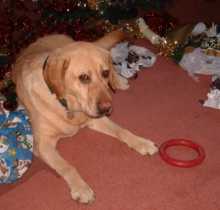 I rip the paper to shreds to reveal……a ball. A bloomin' ball!

I come across dozens of those in the woods every day, yet on Christmas Day the humans expect me to be excited about ... a ball. Saints preserve me. Here I am, the star of stage, screen and a million e-mails, and all I get for Christmas is ... a ball. I didn’t get where I am today by getting Christmas presents of ... a ball. Humans claim that the pleasure is in the giving – well they must have had a real wow of a time over this one!

Molly, meantime, is bouncing up and down with a ring – actually she thinks she has been given a hole, and is trying to get rid of the wrapping……..that’s dizzy blondes for you! (And she posed for this photo, but I promise: she was bouncing. Deliriously.)

I am still fuming when we are told that we are going for a walk. Things improve, and we have a great time around the woods. But I am still miffed, so when Malcolm thinks we are still with him, I give Molly the wink and we are off. About half an hour later, we can still hear his plaintive cry "Good Boy Chudleigh, let's play with your ball". Fat chance. Sound travels well over a couple of miles or so, despite all the trees. We have a mooch around, investigate a couple of rabbit warrens, but sadly no lunch. After a couple of hours, we come across some Alpaca sheep, who are obviously someone's pets. We struck up a conversation, and I found them very interesting, especially their views about the Government’s economic policy for monetary union in Europe .... Soon their owner appears, and we are put on a lead to await Malcolm's arrival. So we sit on the verandah, side by side, good as gold – actually, I am absolutely knackered!

We arrive home, just in time for the humans to have their Christmas Dinner.

The Dining Room candles are lit, everyone troops in to cries of: "Oh, doesn’t it all look beautiful ..." they all sit down, and a huge turkey, which has been sizzling in the Aga all day, is ceremoniously carried to the table and put down in front of Malcolm. The problem arises when he tries to carve it. My boss, you know, the one who makes the e-cards, has cooked it upside down! And who gets the blame? You’ve guessed it: "Well, I was so worried about the dogs, I wasn’t concentrating."

The table is groaning with umpteen varieties of stuffing, chipolata sausages, vegetables, so me 'n' Mol take up pole position under the table.

It is amazing how much food gets dropped, or a tasty morsel left on another table round about nose height. And, if humans are going to have roast turkey, ham, and all the trimmings, why shouldn’t yours truly? So we do. 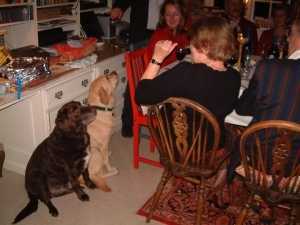 One of the differences between humans and the canine world is that humans eventually stop eating, but we dogs haven’t learnt the art of stopping, so we keep on grabbing anything which comes our way, including our own official meal, which is supplemented by (even more) turkey and the trimmings.

So, as you can imagine, I am not at my sparkling best. Mind you, throughout the festive period, the humans were wandering round complaining of "4 o'clock syndrome", a condition which only disappears when the clock chimes four the following afternoon, which seems to be their cue to start all over again. As if things were not bad enough, we had the sound of strangled sheep (not Alpacas, I hasten to add) again for New Year’s Eve. My pal Rommel, the whymerr ... wymarannn ... wimeran ... Big Grey dog, has an owner who, during his daily walk, insists on practising the bagpipes in the middle of the woods so as "not to disturb anyone". Poor old Rommel has deliberately developed premature deafness, a condition I have been known to use myself when necessity calls, such as being required to do something I don’t want to do. Last year, the humans thought it was great fun to blast off on the bagpipes until the wee small hours of New Year’s Day – and me and Molly had to put up with the same racket this year as well. Never mind – at least the Boss didn’t cook the casserole upside-down ... but there were more rich pickings ... I am not feeling very well again.

So, it’s Another Year, or, as humans would say "as the left hand of history passes the baton to the right hand of destiny", and I am left to wonder why humans talk such utter drivel. However, I am developing a warm glow of anticipation, because it is my birthday in a few days’ time, when I shall be precisely one year older than this time last year. Still in the prime of life. That’s enough to cheer a chap up. And the prospect of all those presents ... BUT if I get given another ball... 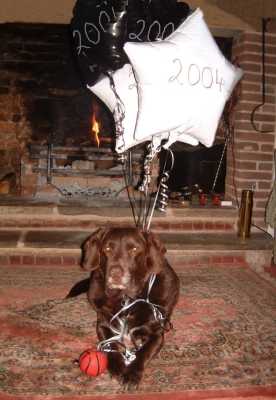