Of Mud and Movies

I have been inspired – I am, as you already know, inspirational, but this time I have been well and truly inspired.

I was introduced to the diary of a dog called "Buster", who, according to his biographical details, is a cross between an Alsatian and a Staffordshire Bull Terrier. In truth it was the blonde, Molly, who found the book - she nicked it from the coffee table in the drawing room – it never ceases to amaze me why humans place their prized possessions at nose height, where a recognised thief, such as a Labrador, is only too pleased to snaffle anything on offer. I came across the remnants on the kitchen floor after she had given it a thoroughly good chewing.

This rather fine creature, Buster, belongs to someone called Hattersley. I say "belongs to" because it is an open secret that those of us with superior canine intellect allow humans to believe that they are the owners, when in practice there is absolutely no doubt as to who is Number 1. Buster's boss, apparently, is someone quite important in political circles, and so over the years, Buster has met a fair few of the top knobs in the country, as well as, by all accounts, nobbling one of Her Majesty's geese in a London Park, an episode which landed his esteemed boss in Court!

Anyway, reading all about Buster's exploits got me thinking. It is not uncommon for a human's diary to be made into a film, which leads to Television interviews, photo shoots and all the razzamatazz that goes with it. Supposing someone decided to turn my diaries in to a full length feature film? After all, life in downtown Lurgashall is serious box office! I would of course have to exercise complete control over the artistic content of the script, and, forgive the modesty, but it is stating the obvious that I would have to play the leading part, as no-one could possibly come close to emulating my class on screen. "Chudleigh Lawson's Diary" would seem appropriate for a title (although I think someone else got in first with that idea), but "Four Pub Lunches and a Dogbone" would work.

But it wouldn't end there! Think of all the merchandising opportunities, with thousands of "Cuddly Chudleighs" on offer in all the cinemas around the globe, endorsements for dog food, guest appearances as the top judge at Crufts. Still more - top actors go on to other lucrative careers - or go in to politics. I mean, some even end up as State Governor or National President ... just think, King Chudleigh the First ... 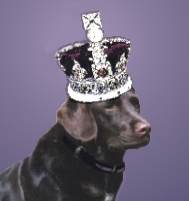 But before I get totally carried away...

At The Shop (where I was born), we have a new neighbour, Gus, who is a black Labrador puppy. He brought his owners round for afternoon tea recently, and we dogs had a fine old time. Gus hadn't done water before, so this was a treat for him, as we introduced him to the garden ponds. Molly has perfected the belly flop, which practically floods the whole garden. (You know the story about Archimedes shouting "Eureka!" as he got in his bath? Well, it wasn't Archimedes who thought that one up – it was Molly.) I prefer to enter more sedately, as is only befitting a dog of my superior breeding and status. Gus obviously hadn't a clue what to do, so Molly and I helped. We raced round the garden. We know all the short cuts – Gus doesn't. We got ahead, and in trying to keep up, he took what he thought was a short cut, but is in fact part of a pond which was covered in duckweed and so looked like lawn.

KerSPLOSH!!! Oldest trick in the book – never fails! Before you say a word – of course he could swim – he's a Labrador!

From time to time, the boss and Malcolm go away for a short period, and so we have a house sitter, Karen, who stays in the house and keeps us entertained. She certainly knows the way to a chap's heart, as she keeps me in Rich Tea biscuits, which she takes on walks to bribe me not to go haring off across the countryside. Malcolm does something similar – just as we are returning from our walk, my usual habit is to disappear to the village pond, or into the Pub to see what tasty morsels are on offer. Malcolm clearly got fed up chasing me to the pub, so now he calls: "Chudleigh, what have I got?", and of course it's one of my favourite biscuits which I find hard to resist. While I am chomping away on said biscuit, he slips the lead on me, and I am nabbed. I have yet to work out how to have the biscuit and escape – I must apply my superior intellect to this seemingly imponderable conundrum.

There are three horses in the field next to the footpath which takes us down to the stream. Their humans ... again, surely it must be the horses who own the humans – after all, it is the horse who has its feet on the ground, while the human, sitting astride, is six feet up in the air, allowing some other form of animal life with a brain to be between the human and terra firma. Which of the two is in control?

I digress ... their humans have provided the horses with a supply of food: nuts, oats and the like. Molly and I normally take a detour off the path to sample what's on offer. Last week, I was nose down in the trough when I saw the three horses approaching – "who's been eating my dinner?" and all that. I gave a gentle growl, with the clear message that the horses should go and find some other nuts to nibble. Obviously the horses were not used to the authoritarian tone of my voice, and leapt up in the air. Now, twelve hooves going up and, more to the point, coming down simultaneously on the hard ground, and then haring off to the other side of the paddock, makes a bit of a racket. If, like Molly, you are 100% focussed on chomping your way through another bucket of goodies, then this racket comes as something of a surprise. Molly also leapt up, and scampered off in the other direction. I strolled over and finished off the remainder at my leisure.

The bluebells near the stream were prolific this year, but so was the wild garlic, which was a real nuisance. Heading off on the trail of some rabbit or other, I found myself going round in circles as the garlic confuses even my keen sense of smell. On the way back from the stream, Molly has taken to imitating those large machines which shift enormous volumes of earth. She is convinced that there are a couple of thousand rabbits living just below the surface, and so has been digging this large hole for the past couple of months. Every time we come back, the only part of her you can see is her tail sticking above ground level as she digs deeper and deeper. I arrive at my normal leisurely pace, examine the evidence (or rather, lack of), sniff disdainfully and move on, as does she, eventually.

On the subject of earth moving, Molly has been in her element recently, helping Richard dig some large holes in the garden.

I am a little disappointed in Richard, ever since he brought round some large sticks, which I thought would make marvellous toys, only to find he converted them into a fence to stop me 'n' Mol escaping. However, as revenge, I now watch him constantly when he's trundling the wheelbarrow in and out of the garden gate – and the other day, when he left it open for one second – I was through it and off to the Pub in a flash. He didn't know I could move so fast!

The idea for these large holes came to my boss (you know, the one who sits in front of the computer drawing all these cards) in one of those rare occasions when she left the computer and went for a potter round the garden. "That pond is the wrong shape!" she declared, whereupon Malcolm found some terribly urgent business meeting to attend and Richard came in with his shovel.

Now, call me old fashioned, but I would have thought that the opening gambit when changing the shape of any hole in the ground which contains a sizeable volume of water would be ... No.1. REMOVE THE WATER.

Obviously there is something missing from my canine logic, because before anyone could say "yes please, a pint of beer would be lovely", Richard is knee deep in watery mud shovelling away for all he is worth. To help matters (I use the word "help" in the widest context imaginable), Molly decides that this is rather a fun place to be, and leaps into the middle of the bog, and is by now in such a state that the entire village is singing along to Flanders and Swan's immortal tune "Mud, mud, glorious mud"!

This picture below shows Molly and Richard, in conservation mode, rescuing the wildlife (newts, frogs and the like), which were re-homed in the other ponds in the garden. I look on from a distance. On the one hand, I am contemplating how to deal with film scripts and lucrative endorsements, while all around me the occupants of the hole in the ground are hurling mud around as though they have just discovered a hitherto unknown New World Health Farm. I think I'll stay over here for the moment, and envisage Superstardom ... 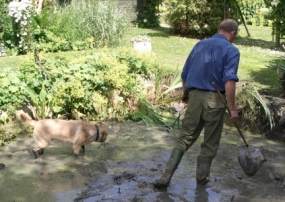 In the distance I can hear the humans squelching about, but my mind is too full of Spielberg, Attenborough and Zimmermann to worry about subjects of an aquatic nature ...

I think the humans are now trying to carpet the hole – what will they come up with next? 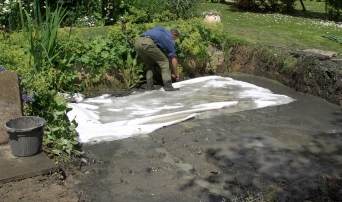 Meanwhile, much to her chagrin, Muddy Molly has been tied up – presumably to keep her off the new carpet? 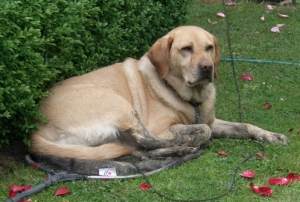 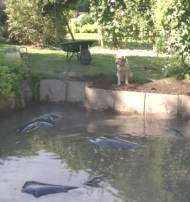 I'm not sure the carpet laying was too successful: on my return, it is obvious that this has disturbed several whales who, up until that moment, had been happily wallowing in the privacy of their own watery sanctuary.

They came pretty close to the surface, as you can see, and they must have got seriously hacked-off at being disturbed - one of them continues to protest by firing water four feet up in the air from the middle. Mmmm... "Chudleigh meets Jaws" could be a real money spinner ...

I finally turn my mind away from matters cinematic, and realise that the humans have lined the hole and installed a fountain. In fact it did not take them very long to complete the operation, and now, what had been one large pond has been splendidly converted into two smaller ones with a grass walkway across the middle.