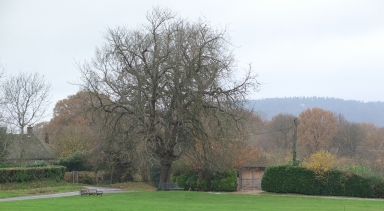 Well, not quite. They've gone through their normal transformation from bright green to faded green, and thence to orange and on to brown, before dropping off the trees, and now they are lying all over the place. They really are a nuisance. They pick up the smells of rabbits and other interesting pursuits, but the wind then blows them all over the place and so the trails go in all directions except the right one. It really is most frustrating for a finely honed sleuth such as myself, one who has a trained intellect capable of tracking down the most evasive of prey.

Not that I know what to do when I do eventually find my quarry. When I do get to within a whisker of (by now) a startled rabbit, the closest I get to it is to see its backside disappearing in the opposite direction through the undergrowth. Matters are not made any easier when Molly comes crashing through, lugging some five foot long stick in her mouth and expecting everyone to play with her. In my ever so 'umble opinion, the best thing for any stick is for it to be chopped into small pieces and plonked on to a roaring fire where I can sit in pole position in splendid comfort. Particularly appealing is the sofa next to the fire, although I do have to share it every now and then with my boss – why she can't sit somewhere else is beyond me. 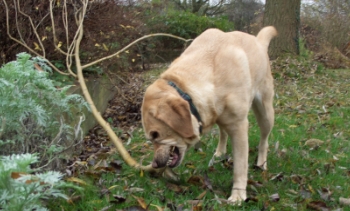 Me and Mol were deserted earlier on this year. My boss and Malcolm disappeared for three weeks, leaving the two of us in the house with a succession of house minders. At first we resented this intrusion – it felt like a version of "Pass the Parcel", as first one person, then another, then another, then ... (you get the picture) turned up to house-sit. Er ... Excuse Me, but this pile of bricks and mortar, even if it is 400 years old, does not actually need anything doing to it while they are away, but Me and Mol... well that is a different matter. We are not mere chattels (well I'm definitely not, although I'm not sure about the blonde), to be passed from one human to another. We are the finest specimens of the canine race, deserving of the best treatment.

And so it was that we decided to turn this unhappy turn of events to our advantage (well, I decided – Molly just made up the numbers). First Karen came in and stayed. She is under the impression that I will do anything for a Rich Tea biscuit – she is almost right, but it took me a long time to train her. Then Rory and Karen (a different Karen – are you keeping up?) stayed at week-ends, but neither could work out whose turn it was to feed us, not could they understand why our food ran out so quickly when my boss had told them there was plenty for the entire three weeks. Thus it was that when Rory and Karen handed over to Karen, or sometimes Jo who is Karen's daughter (still with us?), they had no idea who had fed, watered or walked these two adorable dogs sitting doe-eyed, tails wagging, plaintively whimpering... WE HAD A BALL!

Now the summer is over, my boss lights the fire in the drawing room. Lying on the sofa (even if I do have to share it) in front of a log fire is the best way to while away a winter evening, allowing me to reflect on recent events, and then to nod off. Which I do ... only to be woken by some human buffoon screeching "Look everyone, Chudleigh's dreaming". Well of course I am, that is what one does when one sleeps, when one is in a quiescent state, consciousness almost entirely suspended and the vital functions inactive, thereby allowing thoughts and imaginary sense-impressions to pass through the brain – surely everyone knows that!

During our period of desertion, my boss apparently holidayed in California – all right for some, all I ever get is an occasional furtive escape with Molly to Dial Green, about a mile away as the crow flies. I must have picked up on the conversations about their holiday snaps (you know the sort – here's a picture of us going to the beach, here's a picture of us on the beach, here's a picture of us leaving the beach, here's ... oh I'm sorry it's upside down, etc,etc), because despite the wintry weather I have found myself dreaming of sunnier climes and Hollywood. Perhaps it is my frustrated ambition to become a film star, or President, or some other grand position. After all, the good people of Hartlepool did elect a monkey as their Mayor (I don't believe those stories that it was a real person inside a costume), so why shouldn't a canine mutt, one of superior intellect such as mine, aspire to higher things. Perhaps I should embark on a world tour – Elton John does it, so why not yours truly? Around the world in 80 walks, or something. Hey ho - to sleep, perchance to dream – one of my favourite passages from Hamlet.

Talking of my boss (you know, the one who sits all day in front of the computer drawing all those e-cards), she has been doing just that for some time now, particularly with the Christmas card. She suggested that I might like to "model" for the Hallowe'en card. MODEL! What a nerve. I have been acclaimed as the star of stage, screen and a million e-mails, and I am then expected to model – heaven forefend!! And in view of what happened to the cat in that particular plot, I think I was wise to decline. So I went AWOL – not too far, just out in the garden, where, on occasions such as these, the manure heap can be especially soothing. When I was called to "model", I would dutifully appear, complete with a delicate aroma about my person, which distracted my boss long enough to put any idea about "modelling" to one side. If, as happened on one occasion, she did decide to go ahead, then the pile of old grass cuttings, followed (if necessary) by a dip in the pond proved to be successful alternatives, until something else took hold, such as the telephone ringing or Bev arriving clutching a bottle of Frascati. 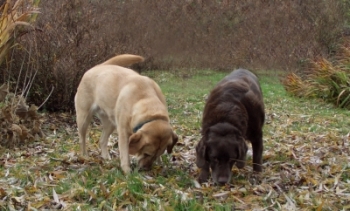 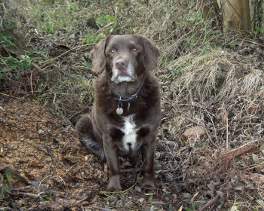 Now those of you with a classical education will be dismayed at my use of the word "alternatives", because you can of course only have one alternative, not several – from the Latin word "alter", meaning either (as in one of two). I pick up these titbits from Malcolm, who is a mine of useless information, mostly accumulated when he is ploughing through various dictionaries looking for the answer to a clue in the crossword. And so it was that I discovered last week that Tsar Peter the Great was six foot eight inches tall and slept in his boots. I confess I do not know how I have lived on this planet for so long without knowing this nugget of knowledge. Listening to the conversations of the humans, it is clear that they take great delight in comparing the irrelevance of their knowledge, even inventing games expressly for that purpose – "Trivial Disputes" or some such name.

Anyway, back with my boss (this is rapidly becoming a retrospective piece), she really has been focussed on the computer for long hours. Dawn to dusk, and sometimes dusk to dawn, there she is sitting in front of the screen, clattering away on the keyboard and doodling with her magic pen. Far be it for me to imply that the computer has taken over her life, but when someone told her recently that they had been to Venice by train, my boss assumed they had been on one of those mystery tours called "Murder on the Outlook Express". I think she should get out more.

And so we come to Christmas, a time of great opportunity in the canine world. The leaves are slowly sorting themselves out (where DO they all go to?), and so walks are getting back to normal. Mind you it is a little on the chilly side, but we canines are made of strong stuff, so we don't need the seemingly endless layers of clothes which the humans wrap themselves up in. Molly and I bounce around the kitchen while the ceremony of donning the wet weather gear is performed – we help by barking in time to the humans shouting "Shut UP, Chudleigh", which I take to be all part of the ritual.

Eventually the back door is opened, and we head off. Molly is usually first out, and has been known to head straight for the pond. Last week she did just that, only to be somewhat bemused by skidding across the top instead of going in – personally, I don't do frozen ponds, but I would have thought that by now Molly could have worked out the difference. Out of the garden, across the green, ignore the Pub as there is no-one sitting outside at this time of year to offer a tasty morsel, in to the Churchyard (and out again), and off in the direction of one of the farms... so the walk develops.

And so we return – where's the fire? Anyone sitting on my sofa?

A last look outside as darkness falls ... "and the sky is grey" 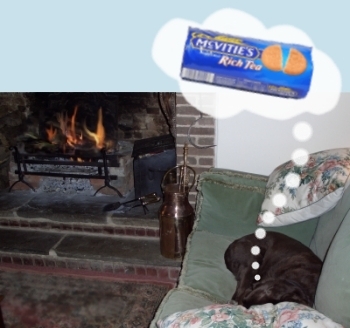