My mornings start with the arrival of the mail. Like any self-respecting mutt, postmen are not my favourite breed of humans. In fairness, ours is a perfectly affable person, indeed we even have a lady who delivers to us from time to time. The first problem I have with ours is that I cannot get at them – they arrive early in the morning before the humans have surfaced, and drop the letters through the hole in the door into a cage, which is secreted behind a curtain. Consequently, I cannot get at the postman (in fact I cannot even see him to give him the benefit of my ferocious appearance), nor can I get at the mail, and have to content myself with barking in my deep brown "woof" to frighten him off, all of which is accompanied by Molly, the blonde, bouncing up and down like a demented lunatic. 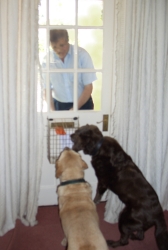 The second problem I have with postmen is that, for the past month or so, I had been expecting a particular letter, but it never arrived. Every year, the first Saturday in June is always the day of the Village Fete, an occasion of unparalleled joy as we canines can watch while the humans make complete idiots of themselves all in the name of "Having a Jolly Time". There are all sorts of things which go to make good canine news: children waving their candy floss in my direction at about snout level are too slow to react as I take an unexpected nibble, and by the time they find out I’ve snaffled the lot and start wailing, I’m across the green to the little boy who is only too delighted (or so I tell him) to share his hot dog with me: I do wish they would not put so much relish on it...

Then of course there is the Dog Race. I, of course, decline to enter. It is way beneath the dignity of someone who is the star of stage, screen and a million e-mails to lower myself to having to compete with anyone, I mean what is there to compete about, one is invincible. The Dog Race is very funny to watch. It is a form of team event, two humans and a dog. One human stands with the dog at the start, and the other human goes to the finishing line to attract their team mate. Another human shouts GO, and then all hell breaks loose. Molly entered this year – when the starter said GO, Molly shot off at right angles and was last seen sprinting around the tea tent, and thence right through the middle of the White Elephant stall, followed (at a distance) by Malcolm who after a few minutes’ fruitless pursuit, retired to the pub. I have no idea who "won" the race, but I did see a poodle later in the day rather sheepishly wearing a "Winner" rosette. Really, the lengths some humans go to embarrass their dogs, and we are meant to be their best friend – you would think they would give us a little more respect.

Anyway, the postman. Every year, the Village Fete is opened by "A Celebrity". We’ve had some lovely people here – Susan Hampshire did it one year, but sadly for her I don’t think she got my autograph. A couple of years ago, before I was famous (ahem..), I know they were struggling to find someone, and on that occasion the Fete was opened by Admiral Horatio Nelson Gander. I must say I thought the idea of having an Admiral to attend the village was slightly odd, particularly as we are about 40 miles from the sea. His speech to formally open proceedings was widely anticipated, until it was pointed out that Admiral Horatio Nelson Gander was in fact a Greylag Goose!!! The humans all thought this was hilarious, which I found strange, until I remembered that they all used to laugh at the Muppets. Anyway, on the day the human who follows the Admiral round said a few words, and all went swimmingly. The Admiral lives in one of the neighbouring villages, and by all accounts is available for weddings, barmitzvahs and funerals. 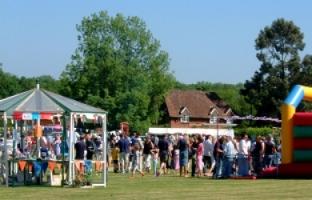 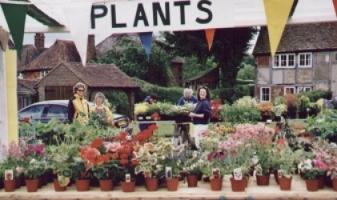 Where was I – oh yes, the postman. Do you know, I am getting so forgetful these days. Sometimes just after I have escaped through a gap in the side gate which the humans think I haven’t spotted, it can be several hours before I remember again where I live. The blonde has the same problem. I also think that this condition is contagious between dogs when we are out together, because if the blonde and I do get out, it takes even longer before one of us can recall the route back home.

The postman...the word was out that, as before in the year of the Admiral, the Fete Committee was looking for someone to open the Fete. Well, look no further, or so I thought. Days came, and days went, and my Boss, you know the one who spends hours in front of the computer screen drawing all those e-cards, seemed oblivious to the calls of the Committee to find A Celebrity. I thought it can only be a matter of time before a gilt edged envelope would pop through the door, requesting the pleasure of yours truly to do the necessary. I of course would check my diary to ensure there was no clash of celebrity events (fat chance of that happening, seeing that my Boss seems to spend ALL her time in front of the computer screen), before graciously accepting. I mean, the prospect of all those biscuits being pushed in my direction...

But it never arrived. They asked the Vicar instead. Excuse me, but that hardly ranks on the same level of "Celebrity" as a certain inter-continentally acclaimed mutt!!

Mind you, I like the Vicar, in fact I hadn’t seen him for a little while since that famous, or rather infamous, Sunday morning a couple of months ago. I was out and about, forgetful as ever, listening to the strangled human cries of "Chudleigh, good boy, come home", which is human speak for "where on earth are you?", when I happened to find myself in the middle of the Church. Well it was all very quiet and I just somehow wandered in. The door was open, and I focussed on all those interesting smells at nose level. Suddenly, a loud voice came from the pulpit, the Vicar’s as it transpired: "Before we sing the next hymn, will someone get Chudleigh out of here". 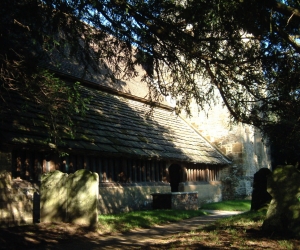 They were very good about the doggy-doos. I was so startled, that ... well I’m sure I don’t have to go in to the sordid details. I think I am correct in my assertion that that was the first such instance of anything like that ever happening in Lurgashall Parish Church, indeed possibly any church. I don’t get forgetful any more in the vicinity of the Church

On the way back from that embarrassing Sunday experience, there was no chance of an escape as I was put securely on a lead (if Malcolm had had his way, I would also have had a blanket over me rather like one of those criminals you see on TV whose identity they are trying to hide). We scuttled back, but Molly was bouncing up and down. I thought her energy came about because she could not see what all the fuss was about, until I saw her looking up to the sky. There, perched on top of a telegraph pole, was a pigeon, doing what pigeons do best – no, not that topic again, but going "coo cooooooo coo" as if to pour scorn on those of us who are anchored to terra firma and unable to get up in the air without the aid of a trampolene.

Out of loyalty to Molly, I joined in the argument, both of us snarling and barking, but to no avail. The pigeon just sat there. I must say that they do seem to have a very limited vocabulary, which from my observation consists of only two words "coo" and "cooooooo". Perhaps it is a form of morse code. We canines have a far more diverse vocabulary – I mean, there are 264 different ways of saying "feed me", but there is no natural way for us to say "Yes I will do what you say", unless it is preceded by one of the 264 aforementioned expressions.

You would have thought that the cat might have helped, as they are, according to popular mythology, meant to be birds’ greatest enemy. I can never remember the cat’s name, another sign of my general forgetfulness, so I refer to him as Ceefer ... I can remember important names, such as the those of the humans (because they feed me) and of course other dogs, but I sometimes lapse and forget even Molly’s name, in which case I just call her "Beefer" ... I once befriended a rat, whom I referred to as Arfer, and when I saw a couple of tadpoles in the pond the other day, I christened them Teefer and Teefer 2, ‘tho I shall have to change their names shortly to Eff-fer and Eff-fer more.

Where was I..? Postmen...no. I’ve done with them. Pigeons, that was it. Soon several other pigeons came and joined in the banter, which caused a cacophony of morse code exchanges – any eavesdropping interloper would have had his headset scrambled in a trice. Me ‘n’ Mol gave up after a while, as it is hard to hold an argument with someone 20’ up in the air. A few minutes later I realised what all the pigeon racket was all about – they had been calling up reinforcements, A curious phenomenon appeared in the sky some distance away, and got considerably bigger as it headed in our direction. At first I ignored it contemptuously, as you do, but it just kept coming. I told it to go away – it kept coming: it seemed to be belching flames into its underbelly. I told it (again) to go away, only a little more forcibly - we canines have rude words too! Eventually, I gave it what for, and it sailed over the top of my head before crashing to the ground on the village green, where several humans climbed out of a basket . Ha – that will teach it, don’t mess with me sonny.

I thought this thing must have been a variation of a Village Fete, because the humans kept talking about what a Jolly Time they had just had, but apparently the humans refer to this escapade as a hot air balloon: I wonder what a cold air balloon looks like? What strange pastimes these humans get up to at week-ends.

And so Monday comes around once more, time to start the weekly routine for snaffling the postman once more. 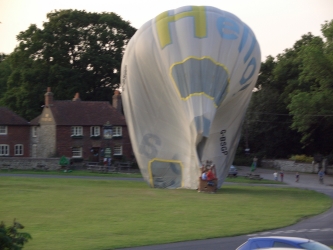