Just before last Christmas, the Boss (you know, she who sits all day in front of the computer drawing all those e-cards) and Malcolm were behaving very strangely - muttered conversations, much poring over brochures and timetables, and incessant telephone calls. But they didn't fool me 'n Mol. Something was definitely up, with a capital U. The highly sophisticated sleuth that is yours truly eventually reached a conclusion: They are GOING AWAY. I'm sure I heard them mention a place called Dow Nunder but Molly said the Boss asked Malcolm the best way to get to Oz. Get to Oz, for heaven's sake! ALONG THE YELLOW BRICK ROAD - even a poodle would know that.

The important thing to know was: if they were going away without us, who was going to have the great privilege of looking after me 'n Mol? Well, looking after me anyway... Two days after Christmas the question was answered. Just as the pile of suitcases by the front door had grown into a small mountain, their friend O'Toole turned up. He had looked after us before - quite a nice fellow - a prolonged bout of tailwagging and slobbering at meal times can usually persuade him to dish up seconds, even thirds... but we were a little worried how O'Toole was going to cope with the dirty dishes when Malcolm picked up the Boss's biggest suit case and asked her: 'Are you sure you remembered to pack the kitchen sink?' 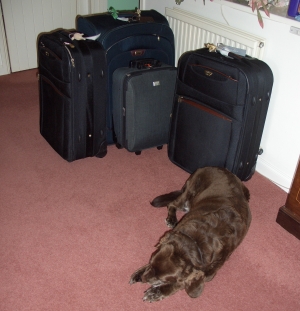 However, we do have one thing in common with O'Toole - he loves to go for long walks, although we have to keep him on a lead in case he disappears into the nearest pub. And he does not seem to relish the more subtle scents of the countryside, nor the delight which Molly experiences from a gentle roll in (how may I say this without offending my human readers?) the trail the fox left behind the previous night..One really warm day, he took us on a very long walk indeed. I think he must have got lost, because we suddenly arrived at a very remote pub. O'Toole was about to enter when he spotted a notice on the door: NO DOGS (Guide Dogs Only).

He muttered a few very rude words to himself, which have no place on a decent dog's website. Suddenly he had a brainwave, adjusted his sunglasses, put me and Mol on our leads, and groped his way into the bar. "Hey", shouted the barman. "No dogs!" "Surely you permit guide dogs?" O'Toole retorted, to which the Barman replied "I thought they only allocated one dog per person". Quick as a flash, O'Toole comes back with "How many have they given me, then?"

O'Toole's lady friend (I was going to say his 'bitch' but I don't think human males address their females by this term, except on very long distance phone calls) joined us one day. The two of them took us out for a stroll across the Village Green, where we were accosted by a couple sitting outside the pub. "Is that Chudleigh?" they cried. "We've driven 25 miles on the chance of seeing him! May we take a photo?" You should have seen our humans preening - lip pouting, hair slicking and so on. And you should have seen their faces when the woman announced: "Not you, just the dogs!"

When the Boss and Malcolm finally returned home, it turned out that they didn't go to Dow Nunder after all. They went to a place called Australia, which can't be very far away because they said it only took them 24 hours to get back, which is about the same time it took O'Toole to get us to that remote pub and back.

So life returned to normal. UNTIL later this summer, when we dogs were sent to Jail. Let me explain: I was taking my morning constitutional around the garden one day, when a man arrived with a big hammer and a load of sticks. Before you can say "Chudleigh, do have a biscuit", this bloke (we were never formally introduced, so, in deference to my Australian fans, I shall refer to him as Digger) starts digging holes all over the garden. This function is normally reserved for Molly, as Chairperson of the Escape Committee. Readers of previous Diaries will know what I mean. After an hour or so of Digger's digging...even I care not to remember exactly what the Boss said when he dug straight through the main Gas supply...there we were with a passable imitation of Alcatraz running the length of the garden. 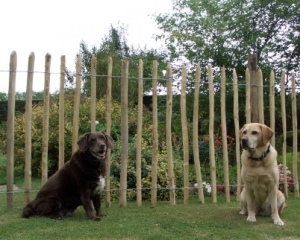 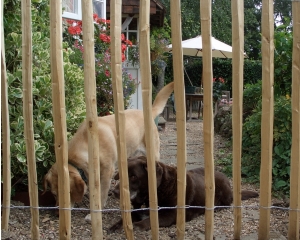 It turns out that this was a cunning ploy to keep us from running away while the humans built a large glass house. For the next couple of months, a variety of humans dug a variety of holes in the part of the garden from which we were excluded. Quite why this was necessary is frankly beyond any form of logical thought process: Molly could have performed the same task for free. Instead, she was incarcerated with me, behind our Stockade, and spent most of the time, still wagging her tail, watching the humans digging away - perhaps she was learning new escape techniques.. 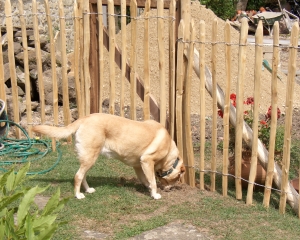 Eventually the glass house was complete, Alcatraz was removed, and Malcolm and the Boss embarked on the ancient tradition of musical chairs. First they placed a collection of chairs and tables inside the glasshouse (which by now had been renamed The Conservatory - what on earth are they hoping to conserve there?) and sat in it. Then they complained it was too hot, so they took their tables and chairs outside. Then it rained (as it does in summer in England), so they took their tables and chairs back inside. Then they said the noise from the rain falling on the glass was too much, so they went to the Pub. Why didn't they just go the Pub in the first place - could have saved themselves three months of devastation in the garden?

While all this was going on, a very nice man called Iain joined in the fun. He poured something called concrete onto part of the garden, with strict instructions for nobody to walk upon it until his return. But, as I'm sure you will all agree, the calls of nature must be answered. Now, there are plenty of trees and grass left in the garden where such calls may be performed, but no, Molly chose to create her own personal Hollywood Walk of Fame...Iain was none too pleased on his return - but Molly, with the mental capacity of a demented squid, just bounced around him, and (you've guessed it) wagged her tail.

As if incarceration behind our Stockade was not enough indignity, we have had a series of visitors this year, quite a few from somewhere Malcolm calls "The Press". Like Dow Nunder, I have no idea where that is...Now I like a bit of attention, and I'm more than happy to go through my repertoire of tricks to earn a tasty morsel. But really, each of those excitable humans has a camera, and I am required to pose first this way, then that, then with this person, then with that, now in a group, now...Molly with the ever-wagging tail, never tires of such occasions - but eventually, when I've had enough, I like to find a peaceful corner somewhere where I can curl up and go to sleep - one should always leave the crowd wanting more.

Maybe Dow Nunder isn't such a bad idea after all... 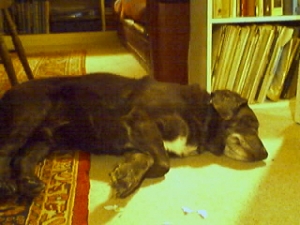